Blizzard’s Adventure
He’s living in an animal shelter, not really living actually, more like existing. His owners left him to fend for himself when they moved away a few months ago. He ended up here inside these gates with nothing but a nametag that reads Blizzard. The memory of his past life has faded; the routine of this cold, autocratic institution is all he now knows.
Blizzard and dogs his size are being herded outside to play and stretch. After he completes the necessary rituals, he finds himself a spot under a bush to watch the other dogs play. Blizzard is a shy loner pup with little socialization skills. Soon he is bored and falls asleep. He doesn’t fit into the “he’s soooo cute” or “what a precious puppy” image. Staff members whisper about how pitiful he is, with blond/white hair, an overbite, so timid and unadoptable. None of the employees show Blizzard much affection.
He awakes with a start to find a lizard resting on his nose, but the rest of the yard is empty. He napped so soundly he didn’t hear anyone call and apparently the personnel didn’t notice he was missing.
He jumps up, excited to explore the yard without interference. This is his chance to pee over all of the other dogs’ pee spots! When he gets to the gate leading to the outside, he taps on the metal frame and the door springs open. He looks all around, the yard is still empty, and no one appears to be watching him. The adventure begins; he trots out to the sidewalk with his odd head held high. He observes some squirrels chasing each other in a tree and sits staring up at them. Suddenly he jumps as high as he can in an attempt to catch the squirrels. Blizzard repeats this effort six, seven, eight times finally he gives up, exhausted. He rests under a tree until a fly whizzes around his head. This is most irritating. Following the fly, he tries to bite at it over and over, clamping his teeth together within inches of the insect. Done with the tease game, the fly soars away leaving Blizzard disoriented. He is not sure which direction is the way back to food and shelter.
No EXIF information is available
© Gloria Yarina, Photographer 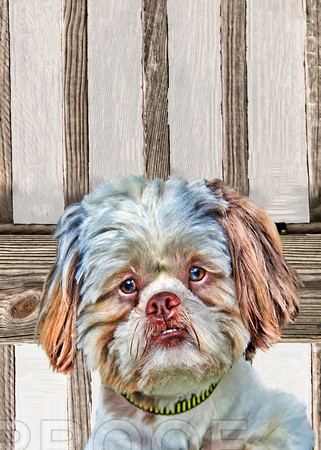