Wise Guy
They were considered the ideal couple, totally in love and in sync with each other (how nice for them). They attended the same college, received degrees in their chosen fields, secured jobs and moved in together. It was time to start their nuclear family: Man, Woman and Dog, no children just yet. Together they visited a shelter, contacted rescue organizations and researched how to choose, train and be responsible dog owners. After their extensive analysis, they adopted a dog they both agreed was right for them and named him Einstein.
For a couple years life was idyllic. Their life revolved around the dogs’ needs. They grew jealous of the time each spent with him. Little by little their happy household crumbled into one of tension, unless they were interacting with the pooch. Small disagreements became full blown arguments.
Ultimately they decided it was best to separate. Material things were easy to split up. Deciding whom should have custody of the Einstein - impossible. Both wanted him desperately. As practical people, they hired a mediator. The couple was asked to bring their pet to the arbitration. The mediator listened as each adult passionately pled their case for dog ownership. The wise referee and dog lover continued the mediation by removing Einstein from the room. Each partner was stationed on opposite sides and told not to speak when the dog reentered.
Not knowing what was expected of him, the canine observed his owners in their separate corners. The three of them had been a unit; they all slept together, ate at outdoor restaurants, visited doggy parks, and weekly perused the Farmers Market. The woman stood on her side, willing the dog to come to her. After all, she brushed him, clipped his nails and made sure he was clean and comfortable. With her arms folded, she gave a silent prayer, “come to me boy.” The male was on the opposite side of the room. He was very relaxed, self-assured.
No EXIF information is available
Gloria Yarina, Photographer 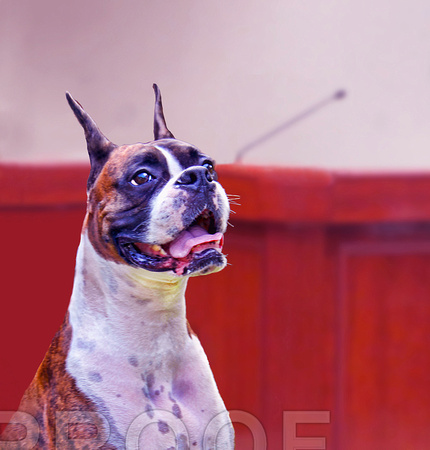