She’s walking on a leash, head down smelling all the foliage on the way to my front door. When she looks up and notices me, she barks loudly. She’s alerting her owners that an intruder is in their path.
They’ve brought her to me because they know I’m a dog lover. Would I take her in? It’s the same old story, them-unable to keep her, me-their last resort.
Something about the dog’s aura appeals to me. It’s an odd feeling since I’ve never met this breed of dog before. Physically she’s unfamiliar, different coloring, longhaired instead of short, too itty bitty by my standards. Preferring larger dogs, I don’t understand why seeing her is like reconnecting with an old friend.
I consider the facts. I have the room; I guess I can keep her for the time being. I can always find her a new home. That’s what I have done for other dogs. She’s called Ginger after Ginger Rogers because she is such a graceful dog. Incredibly, she bonds immediately with my dogs. She outruns them so they respect her as a worthy adversary. I don’t need or want a fourth dog. Yet, it seems this pack is destined to be like the Fantastic Four.
I have to step away and think rationally for a while. After a quick sixty seconds, it’s no use; I know Ginger has found her permanent home. She fills a void where I didn’t know one existed. She looks up at me and I am in awe. She’s the combination of the dog qualities I cherish rolled up into one furry high-steppin’ bundle. Well, she does have a dancer’s body!
No EXIF information is available
© Gloria Yarina, Photographer 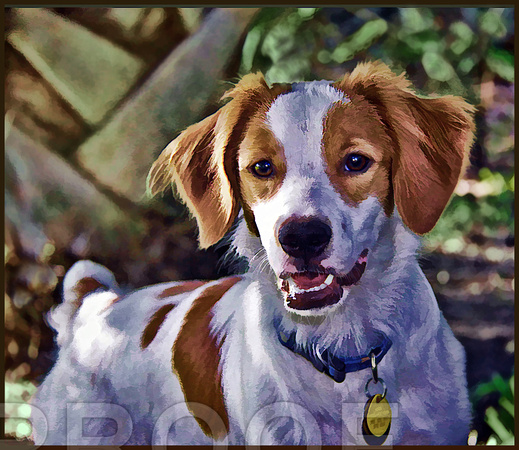